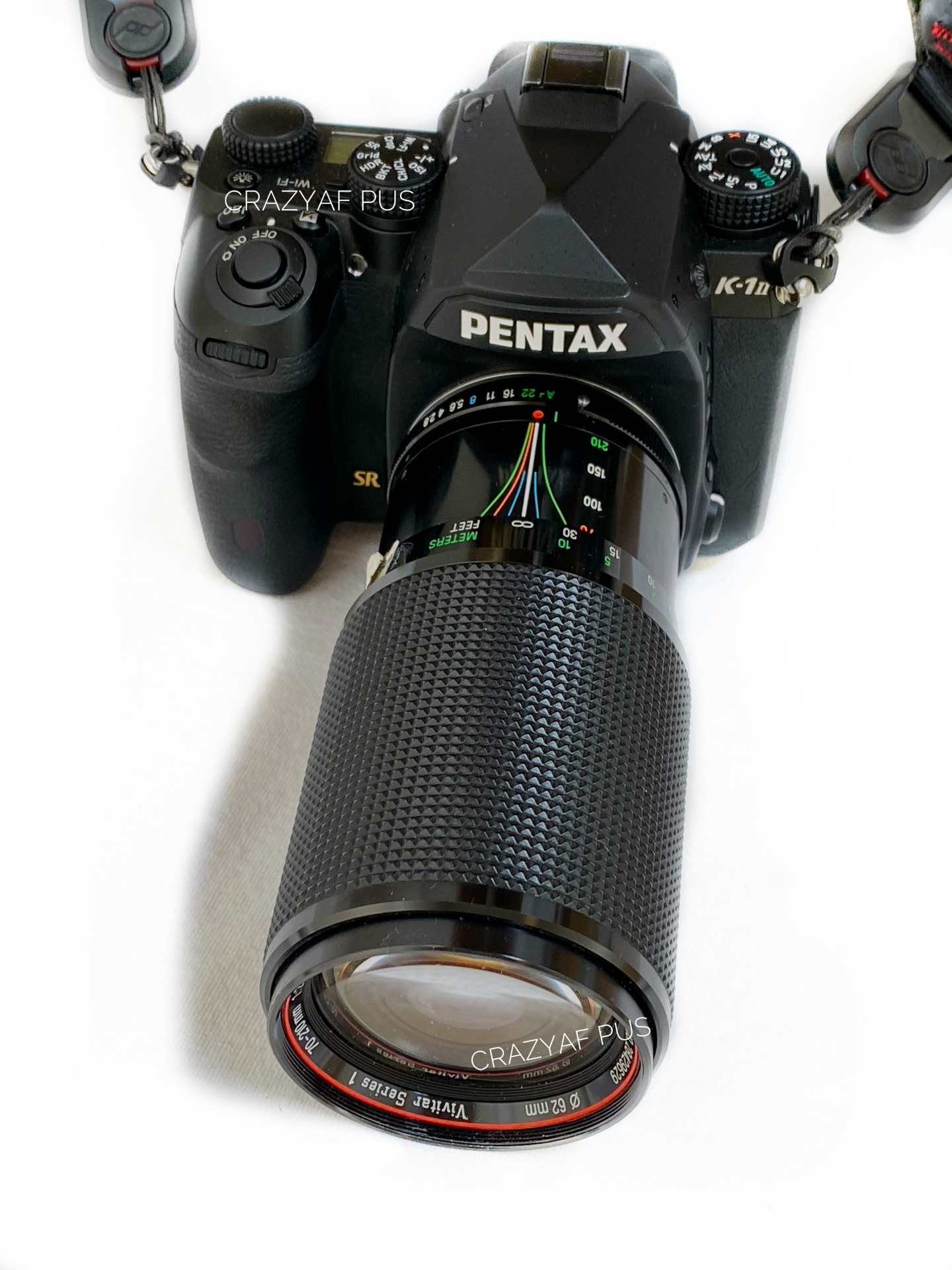 Here’s my first-ever lens review/comparison. I intend to do more for the fun of it, and to satisfy my curiosity. I anticipate most of them will be reviews That Nobody Asked For (TNAF).

This particular comparison will appeal to enthusiasts of vintage lens, specifically those who enjoy mounting manual-focus K-mount 70-210mm-range zooms to Pentax DSLRs, which means practically nobody, but hey, that’s how we roll here. Back in the day, there were also a slew of zooms in the 80-200mm focal length range; for now, we’ll kick off the TNAFs by comparing the Pentax A 70-210mm F4 (manufactured from 1984-1988) to the Komine-built Vivitar Series 1 70-210mm F2.8-4 (my copy was made in 1984, pictured above). The Series 1 line has a cult following.

For more information, check out the Pentax Forums Lens Database for the Pentax and Vivitar, and Robertstech about the Series 1.

The source DNG images were all shot in Av mode on a tripod-mounted Pentax K-1 II in Live View using the 2-second timer. I focused using focus-peaking.

The images were manually adjusted in Lightroom so that they appear equally bright. Other than that, the files used for comparison are essentially straight-out-of-camera. I then used Lightroom’s XY comparison capability to create screenshots, with the Pentax image to the left and the corresponding Vivitar image on the right, all zoomed to 2:1.

The ISO used for the Vivitar was slightly slower than the value used for the Pentax to prevent overexposure at F2.8 (the exposure would have otherwise required a shutter speed faster than 1/8000s).

The pair of images at the middle focal length (I arbitrarily chose 120mm as the middle) displays quite a discrepancy in their field of view, so synching the same part of a scene in Lightroom’s comparison tool is a bit off. This is likely the result of my eyeballing where 120 was on the Vivitar’s focal length markings, and possibly because one or both of the lenses aren’t true to their stated focal lengths.

Some of the shots taken at F2.8 on the Vivitar were 0.7 stops underexposed. This reviewer isn’t sure if this is an anomaly with only the copy at hand. (The blades and coupling mechanism seem to move/work correctly as one turns the aperture ring, fortunately.) Perhaps the variable F-stop nature of the lens was not being communicated to the camera. So, where it states below that the Vivitar was at F4 or F5.6, what that means is the value returned by the camera while in aperture priority mode. For this reason, and because the Pentax doesn’t go any wider than F4, shots taken at F2.8 don’t appear anywhere below.

Shots from both lenses at F8 and F11 have been omitted for brevity.

As always, bear in mind these results are based on a sample size of one, so yer mileage may vary. I have, however, ruled out any gross decentering problems by conducting a battery of brick wall tests.

The Pentax fared much better than the Vivitar with respect to purple fringing and corner sharpness. I was a little surprised that the Pentax had problems in the bottom right corner at 120mm at F4, but it just goes to show how the same zoom lens can excel at some focal lengths and then head south at others. They are complicated mechanical beasts.

The images from the Pentax are noticeably warmer and less true to life than the Vivitar. Maybe a sign of aging.

The winner of each comparison is tabulated below.

The shot of the tug boats, for all intents and purposes, were taken at infinity focus. How do these lenses stack up at closer distances? What are their geometric distortion and aberration characteristics? Check out Part 2 to find out.